To share your memory on the wall of Charles Rustici, sign in using one of the following options:

Born on December 30, 1922 in Pawcatuck, CT, he was the son of Michangelo and Domenica (Sammataro) Rustici.

Born on December 30, 1922 in Pawcatuck, CT, he was the son of Michangelo and Domenica (Sammataro) Rustici.

A WWII Army veteran, Charles served in the 45th Infantry Division, participated in three amphibious landings, and recorded 522 days of combat. He was among the troops that made the initial landing at the Anzio beachhead on January 22, 1944 and among the first troops to cross the Rhine River into Germany in March 1945. He earned a Bronze Star and a Silver Star, and his unit received the Presidential Citation and the French Croix de Guerre.

A graduate of Bryant University, he was Vice President for Finance of Harrisburg Hospital, past president of the Pennsylvania Healthcare Financial Management Association, and Director of the Holy Spirit Mental Health Center, where he helped establish the suicide prevention program Teenline.

Throughout his life, Charles and his wife Patricia gave of their time to friends and neighbors experiencing health problems. Consequently, they were seen in several doctors’ offices, hospitals, and nursing homes.

A viewing will be held on Monday, March 1 6:00-7:00 pm with service to follow. Burial with military honors will be held at 10:30 am on March 2 in Rolling Green Cemetery, Camp Hill, PA. In lieu of flowers, please donate in Charles’s name to the Children of Fallen Patriots Foundation or Doctors without Borders.
Read Less

To send flowers to the family or plant a tree in memory of Charles Rustici, please visit our Heartfelt Sympathies Store.

Donations are being accepted for:
CHILDREN OF FALLEN PATRIOTS FOUNDATION Doctors without Borders

We encourage you to share your most beloved memories of Charles here, so that the family and other loved ones can always see it. You can upload cherished photographs, or share your favorite stories, and can even comment on those shared by others.

Posted Mar 03, 2021 at 08:14am
Pop pop was such a beautiful kind soul my family and I feel truly blessed to have known him rest in peace pop pop.
Comment Share
Share via:
SA

Alka and I have so many fond memories of him as he was the one who brought us to central PA. He and Patricia have been loving and caring which we always cherished. May his soul rest in peace 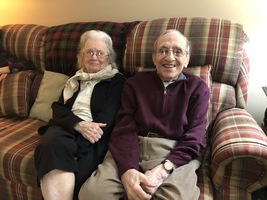