To share your memory on the wall of John Sims, sign in using one of the following options:

To send flowers to the family or plant a tree in memory of John W. Sims, please visit our Heartfelt Sympathies Store.

We encourage you to share your most beloved memories of John here, so that the family and other loved ones can always see it. You can upload cherished photographs, or share your favorite stories, and can even comment on those shared by others.

Posted Feb 13, 2021 at 06:01pm
Deb, Jan, Chris and Families,
I was so very sorry to learn of the passing of your dear Dad. I have so many fond memories of both your Mom and Dad during my childhood. We were so lucky to grow up on Elkwood Drive and have many families who watched over us. Peace and comfort to you all.

Posted Feb 10, 2021 at 08:37pm
Dear Jan, Christine, Deb and all of your families- Our sincerest condolences on the passing our your Father, John. My memories are old, but very fond of a true gentleman with a warm heart. Both he and your Mother graciously welcomed me in your home back in our high school days when we all hung out together. I often thought and commented how much fun they were as a couple. I seldom read obituaries and I don’t know why I clicked on Pennlive this week, but I’m glad I did. He was a special man and our prayers are with you all. Best regards, Glenn and Cindy Gifford
Comment Share
Share via:
PT

Posted Feb 07, 2021 at 12:42pm
Deb, Jan, and Chris, This tree is planted in memory of your Dad. Please accept our most sincere expression of sympathy. May John rest in peace.

Posted Feb 05, 2021 at 09:36pm
Dear Chris, Mark, Deborah, Janice and Family,
We are very sorry to learn of the loss of your beloved Dad and Grandpa to his beautiful grandchildren. Your family will remain in our thoughts and prayers. God bless you all and may your wonderful Dad rest in eternal peace.🙏❤️
Comment Share
Share via: 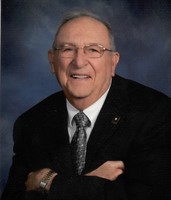