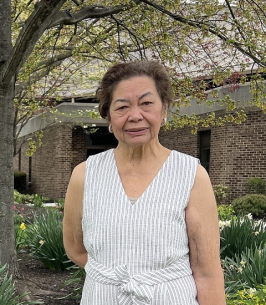 Florinda Diego Reyes Madulid, originally from Gapan, Philippines, passed away in Camp Hill, Pennsylvania, at the age of 75 years old on June 17th, 2022. She was surrounded by all her loved ones as she went to join the rest of our family in heaven.

Florinda went into her retirement in 2009. During her time, earned a bachelor’s degree in education and pursued a career in being an elementary school teacher. Then she decided to become the election officer of her hometown.

Though this could not really capture who she was at heart. Florinda was a daughter, sister, wife, mother, and grandmother. Florinda was born on April 26, 1947, to her parents, Rosa Diego Reyes and Epifanio Reyes. She grew up alongside her siblings Emilita, Daniel, Angelita, Juanito, Chona, Felix, and Epifanio Jr. Florinda married Florante Madulid in 1976. Later down the line, she gave birth to her three daughters, Barbara, Denise, and Charlene. In total, Florinda had five grandchildren, Andree, Andrew, Ayesha, Andrei, and Althea.

Florinda would be remembered by her passion for cooking and gardening. Throughout her life, Florinda’s cooking was something that everyone looked forward to. She was so skilled in the kitchen, that she had relatives asking to send her food through the mail. Another of her biggest legacies that she left her family was her garden. Florinda had a green thumb; year after year she would harvest the vegetables that she had grown in the summer. During the rest of the year she would attend to her various houseplants.